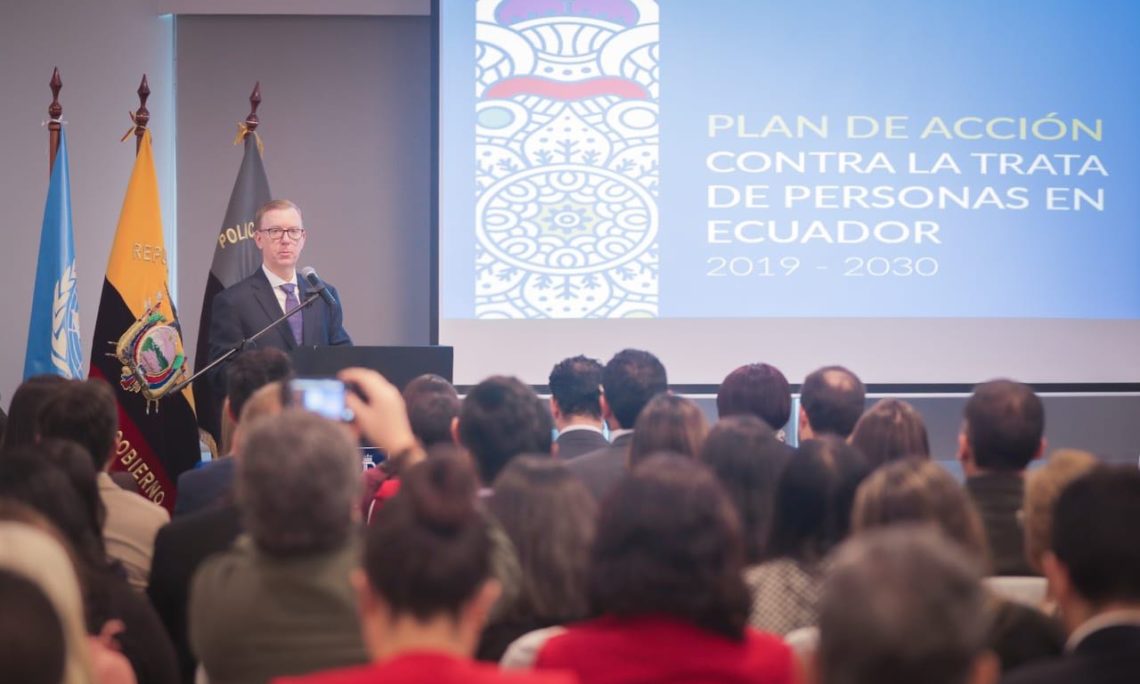 The new Anti-TIP National Action Plan (NAP) replaces the one approved in 2006.  It aims to strengthen Ecuadorian interagency cooperation on trafficking crimes by clearly identifying roles and responsibilities for different government actors and defining lines of action.  The plan will be a critical tool as Ecuador continues to make significant efforts to eliminate trafficking in all its forms.

According to Ambassador Fitzpatrick, “We are united in our abhorrence of the crime of human trafficking.  I extend my sincere congratulations to Ecuador for its advances and continued commitment to strengthen its efforts to eradicate modern slavery.”

Minister of Government María Paula Romo presented the main characteristics of the content of the NAP and its pillars of intervention (comprehensive protection, investigation and prosecution, prevention and promotion of rights, and governance).  She highlighted that combating human trafficking is a matter of priority action for the Government of Ecuador, consistent with its 2030 Sustainable Development goals.

José Iván Dávalos, Chief of Mission, IOM Ecuador, described the NAP as the result of collaboration among the government of Ecuador, IOM, and civil society. He stressed that this plan incorporates present challenges, such as the mass migration of Venezuelan nationals, many of whom are vulnerable to human trafficking.

The U.S. Department of State’s Office to Monitor and Combat Trafficking in Persons (TIP) provided $70,000 to IOM to support the Government of Ecuador in drafting the new anti-TIP National Action Plan.  The U.S. State Department’s TIP office has also provided $1.8 million to nine projects to combat trafficking in persons in Ecuador since 2004. Since 2002, it has provided more than $410 million for approximately 960 projects to combat trafficking around the world.