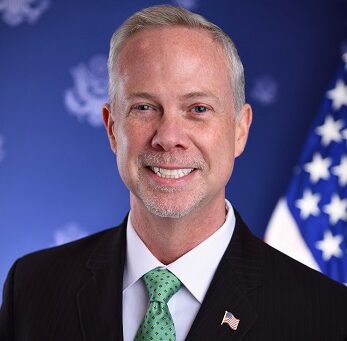 Brian Quigley began his assignment as Consul General at the U.S. Consulate General in Guayaquil, Ecuador in August of 2020. Prior to that, he served as an Advisor in the Bureau of Western Hemisphere Affairs’ Office of Economic Policy and Summit Coordination. He was previously seconded to the Organization of American States where he was the Deputy Executive Secretary for the Inter-American Committee Against Terrorism from 2017 to 2019.  Mr. Quigley served as the Economic and Political Counselor at the U.S. Embassy in Santo Domingo, Dominican Republic from 2014 to 2017.  His prior diplomatic assignments include Mexico City, Monterrey, La Paz, Washington, D.C., Tokyo and Guadalajara.

Mr. Quigley entered the Foreign Service in 2000. He is from Virginia Beach, Virginia, and received a B.S. in International Business from Old Dominion University and a M.A. in Administration from the George Washington University. ​ Mr. Quigley is married and has two children.