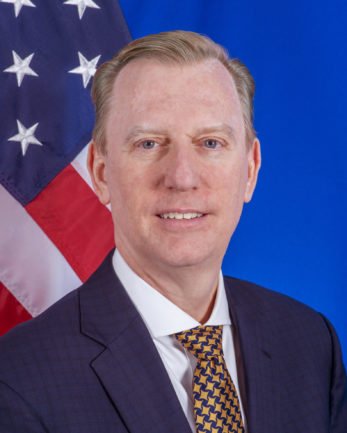 A career diplomat, Michael J. Fitzpatrick arrived in Quito in June 2019 to begin service as U.S. Ambassador to Ecuador.  Prior Senior Foreign Service stints include service as Deputy Assistant Secretary for Western Hemisphere Affairs; Interim U.S. Permanent Representative to the Organization of American States and the United States Coordinator for the 2015 Summit of the Americas; Deputy Chief of Mission and Chargé d’Affaires, a.i. in Lima, Peru; and as Foreign Policy Advisor to the Chief of the National Guard Bureau, a member of the Joint Chiefs of Staff.  Fitzpatrick also served as Deputy Chief of Mission in Asunción, Paraguay.

Earlier positions abroad include Nairobi, Kenya; Brussels, Belgium; Bogotá, Colombia; Manila, Philippines; and Lima, Peru.  Earlier Washington assignments include service as Special Assistant to the Under Secretary of State for Political Affairs, as a member of the Secretary of State’s “Advance” team, and as pol-mil officer (EUR/RPM) in support of the participation of the United States and NATO during the war in Bosnia and the Dayton Peace Process for the former Yugoslavia.

Ambassador Fitzpatrick has received some thirty awards and honors during his diplomatic career, including the Distinguished Presidential Rank Award (the U.S. Government’s highest civilian career award), as well as the Director General’s Award for Reporting and Analysis.  He is a recipient of the W. Averell Harriman Award from the American Foreign Service Association and of Ecuador’s highest civilian award, La Orden Nacional al Mérito, en el Grado de Gran Oficial.

His personal interests include mountaineering, hiking, biking, and other outdoor sports.  He speaks Spanish and French.  He is married to Silvana Valdivieso from Lima, Peru, and they have an adult daughter.