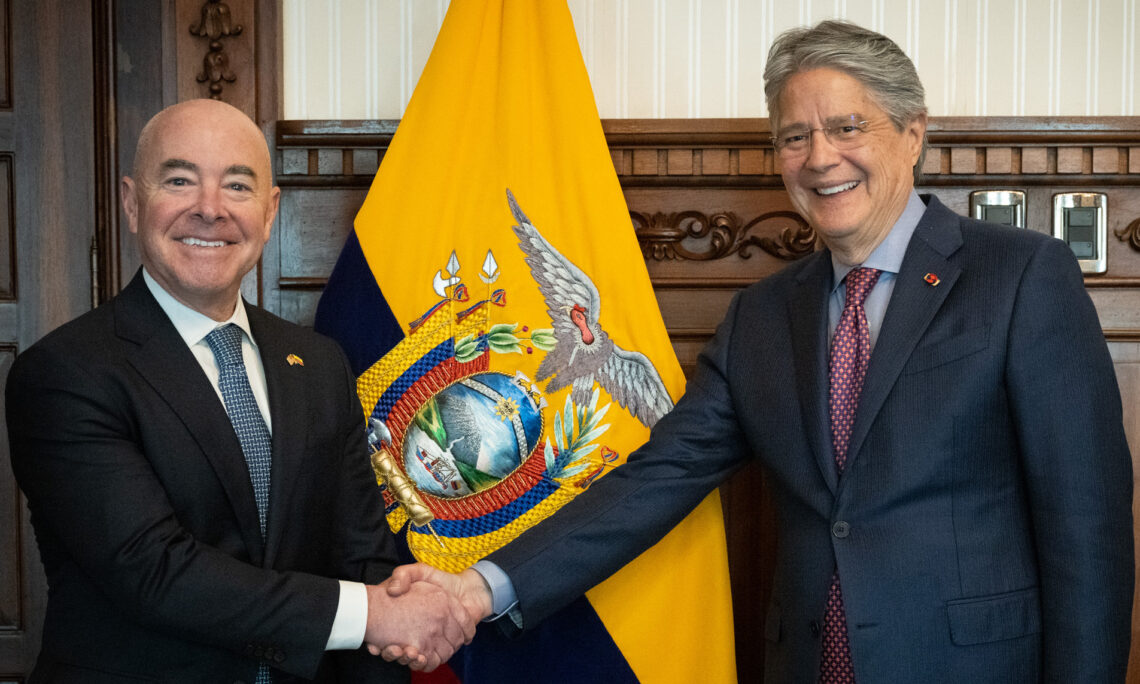 QUITO – Secretary of Homeland Security Alejandro N. Mayorkas visited Ecuador’s capital Quito from December 7th through 8th to meet with senior government counterparts and deepen our partnership on critical issues including strengthening cybersecurity, fighting transnational criminal organizations, combatting the movement of illegal narcotics through our hemisphere, and reducing irregular migration. President of Ecuador Guillermo Lasso invited the Secretary to visit when they met in June at the Summit of the Americas in Los Angeles. President Lasso and his cabinet, including the Ministers of Interior, Foreign Affairs, Government, Defense, Telecommunications, the head of customs, and the Presidential Security Advisor, among others, hosted a series of bilateral meetings that also included U.S. Ambassador Michael Fitzpatrick and U.S. Embassy officials.

In a joint press conference on Wednesday, the Secretary emphasized the importance of the U.S.-Ecuador relationship and reiterated the U.S. government’s commitment to continuing to support and work with the Ecuadorian government on issues of importance to our collective security and to protecting our democracies. The Secretary also stressed that the United States continues to enforce its immigration laws, and urged Ecuadorians not to put their lives in the hands of smugglers, noting that individuals and families who try to cross into the United States without a legal basis to stay will be removed.

The Secretary also met with DHS Homeland Security Investigations (HSI) personnel and the Ecuadorian members of the Transnational Criminal Investigative Unit (TCIU) with whom they work in close partnership to bring down criminal networks and bring criminals to justice. The HSI-Quito supported TCIU was established in April 2018, and its efforts have resulted in significant enforcement actions in the areas of counternarcotics, counter human smuggling, and combatting crimes involving child exploitation. The Secretary delivered an award for the success of this collaboration in breaking up a human smuggling organization that was illegally transporting Ecuadorians to the United States. During his visit, the Secretary also met with DHS Customs and Border Protection officers in Ecuador, who support their counterparts through capacity building and best practices related to customs enforcement, including with respect to the Government of Ecuador’s deployment of Non-Intrusive Inspection (NII) scanners at its seaports, a critical tool in drug interdiction.

Secretary Mayorkas’s visit follows the U.S.-hosted Summit of the Americas in June and the multinational endorsement of the Los Angeles Declaration on Migration and Protection, which included Ecuador among its signatories.