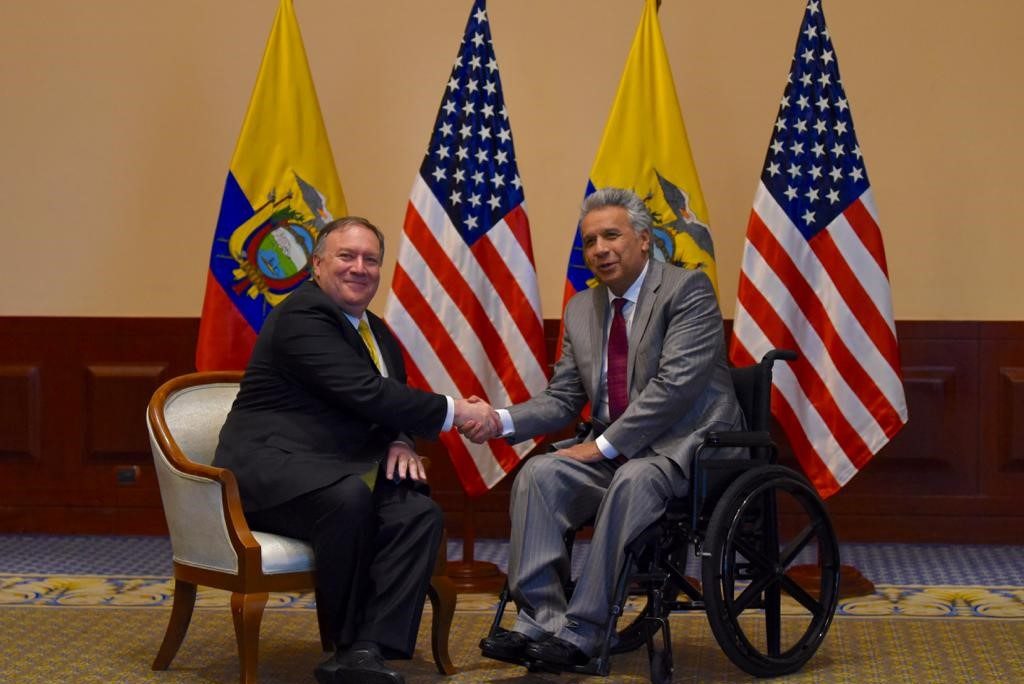 Office of the Spokesperson

SECRETARY POMPEO:  Great.  Gracias.  Thank you.  Mr. President, it’s an honor for me to be here in Ecuador for my first visit as Secretary of State, and I want to thank you, President Moreno, and I want to thank Foreign Minister Valencia and the people of Ecuador for their hospitality on this visit.  I’ve said this time and time again as Secretary of State: America proves our commitment by showing up, and we will continue to be here and continue to show up.  My travels this week continue the Trump administration’s work of strengthening our ties with partner countries in the Western Hemisphere.  That work wouldn’t be complete without a visit here to Ecuador, where our bilateral relationship is coming back to life thanks to some extraordinary leadership on both sides.  We commend Ecuador’s renewed embrace under President Moreno of free markets, of robust security, and of democracy.  It’s what the Trump administration hopes from all of our friends and we see it here every day.
Before President Trump and President Moreno entered office in 2017, there hadn’t been a bilateral dialogue between our two countries in eight years.  In May we formally launched expanded bilateral political dialogue to strengthen operations on areas ranging from counternarcotics to anticorruption to economic development.
This cooperation is bearing fruit for each of our two countries already.  Take – a good example is narcotrafficking.  Through the maritime patrol aircraft partnership launched in September, our authorities have jointly seized more than 24 tons of drugs in the Eastern Pacific.  That’s 24 tons that can’t be used to poison our peoples and finance criminal behavior.  We’ve also worked closely together through our container security initiative to exchange information about illicit shipments transporting the port in this very city.  We’re working to starve these criminal gangs of their illicit income and promote prosperity.
As another sign of our continued good work together, just in a handful of weeks now, Acting Secretary of Homeland Security Kevin McAleenan plans to visit Ecuador to deepen our border security cooperation.  And we’re also working together in the cyber realm.  In just a few days the U.S. will send cybersecurity experts to Ecuador to help defend its networks against intrusion.
We had a great visit here today.  President Moreno and I had a chance to talk about a wide variety of topics, from the crisis in Venezuela to many others.  Ecuador, like many of its Latin American peers, are standing for democracy and unalienable rights in our hemisphere.  I expressed my personal appreciation, President Moreno, for your country’s support of Interim President Guaido and your leadership in addressing the Venezuelan humanitarian crisis.  I know that Ecuador is bearing a burden here and has hosted more than 350,000 Venezuelan migrants and refugees.  This is a truly heroic number.  We’re proud that the United States so far has provided more than $30 million in humanitarian assistance and then an additional 5 million to help with the influx of Colombian refugees that you’re also welcoming.
Further, just a few weeks – a few weeks ago, for the second time in just nine months, we sent a U.S. Navy hospital ship to visit Ecuador to provide medical care to over 8,000 patients, Ecuadorians and Venezuelans alike.
This only scratches the surface of what we’ve achieved over these past two years and it’s a preview, I know, of what we will continue to do together.  The Trump administration is grateful to have a friend, President Moreno, like you in Ecuador.  You have helped this nation turn a corner towards greater security, prosperity, and indeed, to a stronger democracy.  We look forward to a bright future and an enduring partnership.  Gracias.

QUESTION:  Thank you, Mr. Secretary and Mr. President.  Mr. Secretary, to start, you said yesterday that in Venezuela Nicolas Maduro was never going to govern again in Venezuela.  There have been some reports of progress in the Oslo negotiating process and particularly in the negotiations that have been underway in Barbados, and there seems to be discussions of Maduro remaining in the country at least during a transition period.  If the opposition agrees to that, would the United States accept it, that he would be allowed to stay in the country perhaps as a figurehead role, or does he have to leave the country as you’ve often said in the past?
And on Iran, despite the events of the past few days in the Straits of Hormuz, last week brought some glimmers of a possible U.S.-Iran talks.  Yesterday you said that Iran continues to say it wants to talk, but only if the United States does something.  Is there anything the administration can or will do as a gesture to get Iran to come to the table?
And I have a question for the president.  Should I say that now?  Mr. President, you mentioned USAID and other forms of assistance that would be welcome here.  Obviously Ecuador has had an extensive economic relationship with China, as do many in the region, both in terms of investment and in loans.  I wonder to what extent you discussed that and the United States expressed concern about this and offered to help Ecuador in changing the balance of its economic posture vis-a-vis China, and also whether the United States offered any additional assistance to care for the rising number of Venezuelan refugees here.  Thank you.

SECRETARY POMPEO:  Karen, thank you.  With respect to Maduro staying, it seems incomprehensible that you could have a free and fair election with Maduro still in Venezuela on the ground.  I don’t want to rule out the possibility that someone could find a clever way to do that, but it seems that to the extent that you have the Cubans protecting Maduro, they would not be able to deliver a free and fair election.  So without prejudice to what’s taking place in Barbados or Oslo or whatever discussions may be – may have been held, the United States has been very clear it is inconceivable that you could have an election that would truly represent the Venezuelan people with Maduro still present inside of the country.
And then your second question was a bit of a hypothetical about could one dream up something that one might do in order for the Iranians to engage with the United States.  In the end, the Iranians have to – the Iranian regime has to make a decision that it wants to behave like a normal nation, and if they do that we’re prepared to negotiate across a broad spectrum of issues with no preconditions.  And I hope that they will do that.  We’ve done everything we can to create the space for this, to continue to take actions that are deterrents and de-escalation so we can have this opportunity.  But to date we have seen no indications that the Iranians are prepared to fundamentally change the direction of their nation, to do the things we’ve asked them to do on their nuclear program, their missile program, their malign behavior around the world.  I mean, you can just watch their actions.  These are actions that threaten.  We saw the statements of Foreign Minister Hunt.  I spoke to him yesterday.  We saw their actions.  These are not the actions of a country that looks like it’s headed in the right direction, but we hope, as President Trump has said, that they will sit down and discuss each of these items with us.
Thank you, Karen.

QUESTION:  (Via interpreter)  Good afternoon, Mr. Secretary.  My question is directed to you regarding the topic of what is the interest that the U.S. will have with Ecuador with the Galapagos Islands to combat the issue of drug trafficking, and furthermore, the issue of corruption.  What regulations or shall we say recommendations would the U.S. give to Ecuador to combat the corruption acts in Ecuador?  And what degrees of information do you have that an espionage center was being handled in the embassy of Ecuador in London?

SECRETARY POMPEO:  Thank you for that question.  With respect to counter – well, with respect to the Galapagos Islands, the president invited me there and I took him up on it immediately.
With respect to narcotics, the United States has a deep interest in this as do the people of Ecuador.  This drug trafficking leads to corruption, it leads to crime.  There’s no good that can come from that.  Many of these drugs end up in the United States of America in the hands of our citizens and wreak devastation across the United States of America.  So we have a shared interest in pushing back against it and finding ways to reduce the narcotics trafficking that comes through the waters off the coast of Ecuador and indeed through the country itself.
And second, with respect to corruption, President Moreno has made enormous strides and we credit him for that.  Our mission is to where – your country requested to provide assistance so that we can help use tools that we have developed that can assist Ecuador and the Ecuadorian people so that the level of corruption here can go down.  Every citizen across the world, and certainly here in Ecuador, deserves to know that their government is operating in a fair and transparent and reasonable way without corruption, without government leaders taking money.  And so we’ll do our best.  We’ll work best – we’ll work with your department of interior to identify those who have engaged in corruption and help return those moneys to the citizens of Ecuador to whom they rightfully belong.