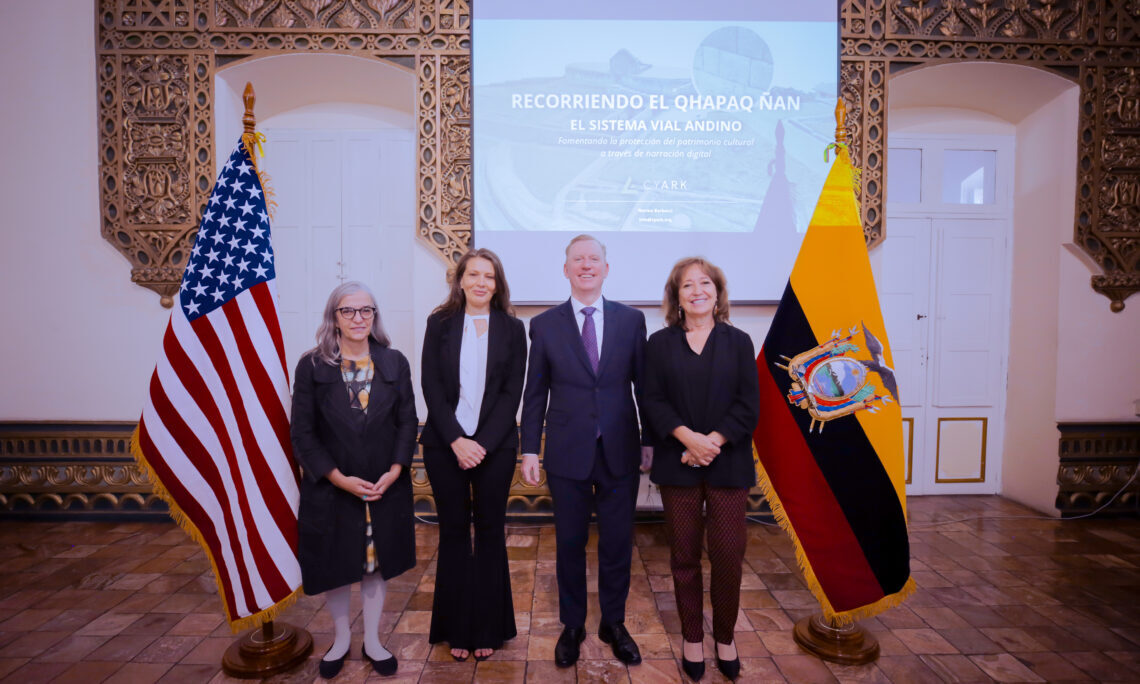 Norma Barbacci, Director of the Cyark Project, Catalina Tello, Executive Director of the INPC, Michael J. Fitzpatrick, Ambassador of the United States in Ecuador, and María Elena Machuca, Minister of Culture, during the launch of the “Touring the Qhapac Ñan” virtual tours.

Quito, August 8, 2022. The United States Government presented the grand opening of the “Touring the Qhapaq Ñan – the Andean Road System” virtual tours, a regional project that encourages greater protection of cultural heritage along the Andean roadways, by telling the stories of people and places and the connection between community members and their heritage. The event was attended by Michael J. Fitzpatrick, Ambassador of the United States in Ecuador; María Elena Machuca, Minister of Culture; Catalina Tello, Executive Director of the National Institute of Cultural Heritage; Norma Barbacci, Director of the CyArk Project, among other authorities.

The “Touring the Qhapaq Ñan” project encourages the protection of cultural heritage through place-based storytelling and was funded by the Ambassador’s Fund for Cultural Preservation. The American NGO CyArk developed this project in 2021. CyArk, which records, archives, and digitally shares the cultural heritage of archaeological sites worldwide, used technology to document and protect the cultural legacy of three sites of relevance to the Qhapaq Ñan (Ingapirca and Pumapungo in Ecuador, and the Aypate Archaeological Complex in Peru).

“It is very exciting to see how the collaboration between countries and the local community can achieve projects for the benefit of their people and cultural heritage. Thanks to this virtual platform, thousands of people around the world will be able to learn about and protect the Qhapaq Ñan archaeological sites, the ancient Inca trail,” Ambassador Fitzpatrick said.

The project worked with about 30 local participants who received equipment and training from U.S. experts to create 3D content to develop virtual experiences that explain why these places are so important for cultural heritage. In addition, the project seeks to raise public awareness of the relevance of protecting cultural heritage, promoting tourism, and providing educational resources.

The United States and Ecuadorian governments signed an agreement in 2019 to prevent the illicit trafficking of goods. This resolution prevents the importation of archaeological and ethnological material from Ecuador, from the pre-Columbian to the colonial period, into the United States.

The Ambassador’s Fund is intended to support other countries in preserving their cultural heritage and to demonstrate the United States’ respect for other cultures, their prosperity and stability around the world. The Fund is aimed at projects conserving and restoring tangible and intangible cultural assets such as cultural sites, cultural artifacts and collections, and forms of cultural and traditional expression in danger of extinction. Applications for the Ambassador’s Fund are announced every year around October/November.

To take a tour of the Qhapaq Ñan and experience virtual tours of Ingapirca and Pumapungo, visit: https://www.patrimoniocultural.gob.ec/un-viaje-por-el-qhapaq-nan/

For statements by Ambassador Fitzpatrick and the Minister of Culture go to:
https://we.tl/t-FlvsUUHmLE

For statements by the Director of the INPC and the CyArk Consultant:
https://we.tl/t-5np0K0sl5E

To watch a video about virtual tours:
https://app.box.com/s/a9lwycql70k731fdcpbngbkq8cqzqfur