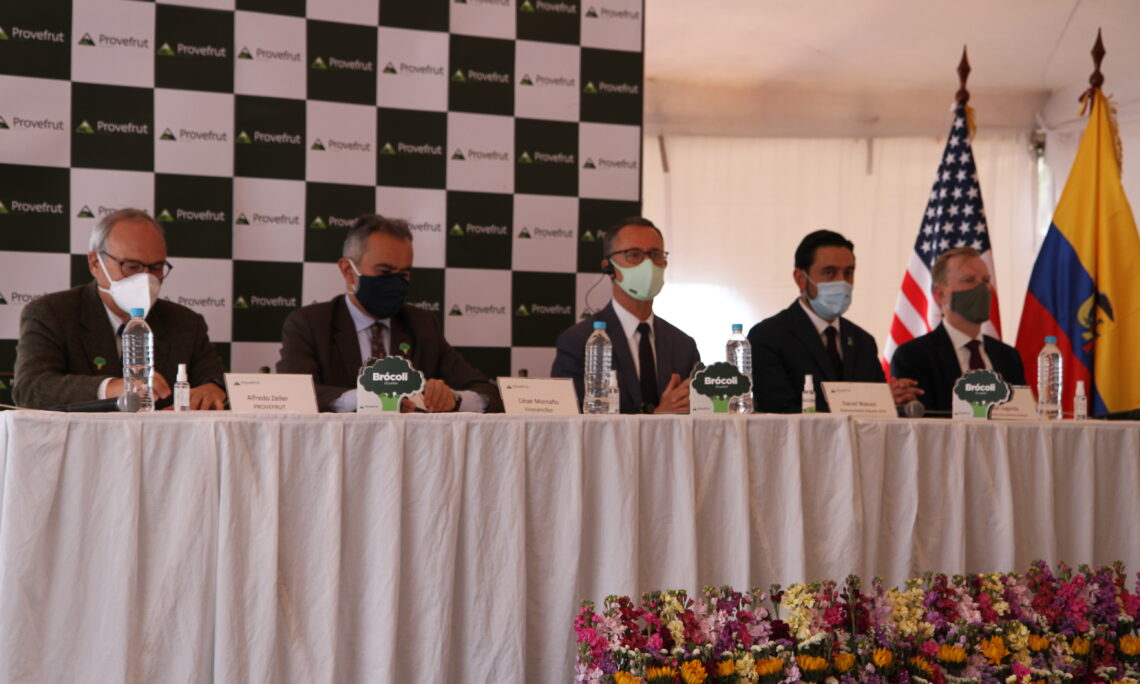 The US and Ecuadorian delegations celebrate the bilateral economic and commercial relationship in a ceremony.

U.S. and Ecuador Mark Entry into Force of Protocols Relating to Trade Rules and Transparency

Quito, August 12, 2021– Today, representatives of the United States and Ecuador marked the entry into force of the Protocol to the Trade and Investment Council Agreement Between the Government of the United States of America and the Government of the Republic of Ecuador Relating to Trade Rules and Transparency, signed in December 2020.  Assistant U.S. Trade Representative for the Western Hemisphere Daniel Watson and Vice Minister of Foreign Commerce Daniel Legarda celebrated the flourishing bilateral economic and trade relationship between the two countries in a ceremony at an agricultural farm and processing facility at the base of Cotopaxi volcano outside Quito.  They were joined by U.S. Ambassador Michael J. Fitzpatrick and Vice Minister of Foreign Affairs César Montaño, as well as representatives of private industry.

The Protocol that enters into force today is composed of four annexes on Trade Facilitation and Customs Administration, Good Regulatory Practices, Anti-Corruption, and Small and Medium-Sized Enterprises.  About today’s milestone, Watson said, “This Protocol is among our highest standard agreements in key areas and completing this negotiation in such a short period of time demonstrates Ecuador’s commitment to making important progress. I look forward to continuing to work with our Ecuadorian colleagues on full implementation and ensuring that the benefits of trade reach the widest possible number of citizens in both our countries.”

While in Quito, USTR officials will also meet with counterparts at the Production Ministry and a range of other government agencies to discuss bilateral cooperation on technical trade issues and opportunities to expand the commercial relationship.  The two countries will discuss the importance of high labor and environmental standards to a strong trade relationship, as well as inclusive trade and investment policy that ensures the benefits of trade reach all citizens, especially women and underserved communities.  In addition, both countries are reviewing areas for possible further cooperation to promote economic growth and recovery from the pandemic.