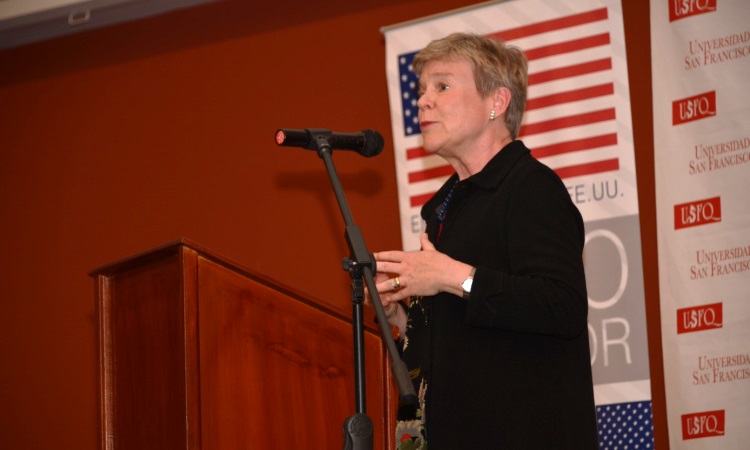 On April 13, the Under Secretary of State for Arms Control and International Security Rose Gottemoeller visited Quito for a series of events and activities that reinforced the U.S.-Ecuador bilateral partnership.

During a speech on nuclear security and nonproliferation at the Universidad San Francisco de Quito, the Under Secretary emphasized the importance of international cooperation to combat nuclear terrorism and recognized Ecuador’s leadership in this area.  She stated, “Ecuador plays an important part in [supporting multilateral] efforts on nuclear security, for example, banning nuclear explosive testing or banning nuclear weapons in massive areas of the world.”  The Under Secretary congratulated Ecuador for working closely with the Comprehensive Test Ban Treaty Organization to install two International Monitoring System stations in the Galapagos Islands.   Both stations will be important to monitor and protect against illicit nuclear tests in the Pacific Ocean and South American regions.

During a meeting with Ecuadorian Acting Minister of Foreign Affairs Fernando Yépez and other senior Ecuadorian officials, Under Secretary Gottemoeller reiterated the U.S. government’s commitment to advancing a broad, positive bilateral agenda with Ecuador.  The Under Secretary and Acting Foreign Minister discussed cooperation on a broad range of security issues and underscored the United States and Ecuador’s common vision for a world without nuclear weapons.

Under Secretary Gottemoeller is the highest level U.S. government official to visit since 2010, and her visit to Ecuador is part of a regional trip to South America that also includes stops in Colombia, Argentina, and Brazil.