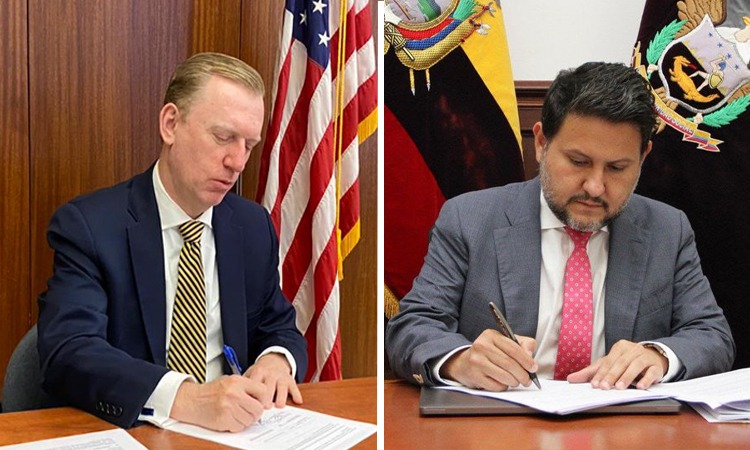 Quito, April 27, 2021– Today, U.S. Ambassador to Ecuador Michael J. Fitzpatrick and Ecuador’s Minister of Government Gabriel Martinez signed an agreement that will create two specially trained units within the Ecuadorian Judicial Police, one in Quito and one in Guayaquil, which are expected to be operative by the end of this year.  These units will work with the U.S. Mission to Ecuador’s Regional Security Office to investigate a variety of crimes–including human trafficking, identify theft, and document fraud–identified either as a result of U.S. consular fraud investigations or investigations generated by Ecuadorian law enforcement that touch on these topics.

Ambassador Fitzpatrick said of the agreement, “I appreciate all the work done by the Ministry of Government and Ecuadorian police, represented today by Minister Martinez and Commanding General Varela, over the past four years to make this law enforcement collaboration possible.  These two units will increase the investigative capacity and reach of Ecuadorian law enforcement by giving them access to relevant information that our Diplomatic Security investigators gather from cases around the world.  At the same time, the cooperation of our Ecuadorian law enforcement colleagues will help the United States deter crimes like human smuggling and get at the organized crime rings behind them.”

The U.S. Diplomatic Security Service will provide the two special Ecuadorian units with equipment, a vehicle, training, and an office space, as well as relevant information on investigations both involving the United States and those involving third countries.  Ecuador is the first country in which units have been established in two different cities to work with two U.S. diplomatic posts.