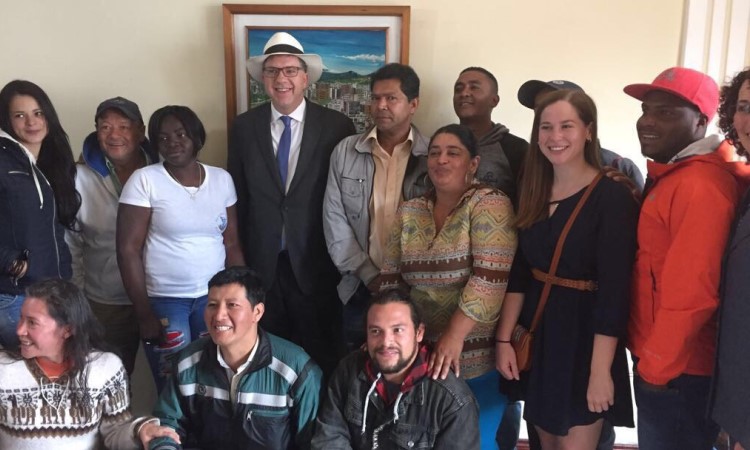 On June 20, in recognition of World Refugee Day, Ambassador Todd C. Chapman met with Catholic Relief Services (CRS), the Scalabrinian Mission in Quito, and a group of Colombian refugees to reaffirm the U.S. Mission to Ecuador’s commitment to aiding refugees and vulnerable populations.  Ecuador receives thousands of refugees from countries such as Colombia each year, making it the largest host country in Latin America.  During the event, Ambassador Chapman met with CRS staff, the Scalabrinian Mission, as well as refugees to discuss current programs and services available to refugees living across Ecuador.

The U.S. Mission in Ecuador has a strong history of aiding refugee and vulnerable populations, in collaboration with the Government of Ecuador.  The U.S. Department of State provides financial and technical assistance to civil society and nongovernmental organizations, such as CRS and the United Nations High Commission for Refugees (UNHCR), in Ecuador.  During 2016, the United States provided nearly $26.2 million to UNHCR’s global appeal for operations in support of displaced persons and refugees in the region.  Approximately $13.25 million of this amount supported UNHCR’s overall response for Colombians in the region, including in Ecuador.  The U.S. Mission will continue to support refugees and other displaced and vulnerable populations in Ecuador to facilitate integration through access to legal services, education, health, and income generating opportunities.