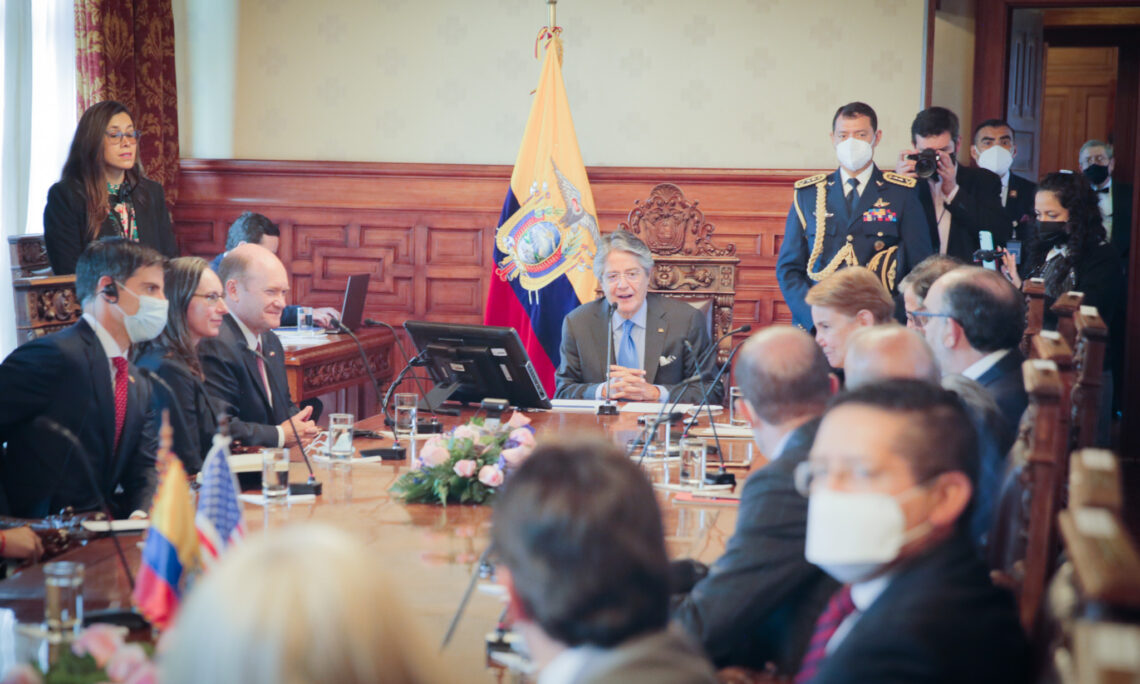 Quito, August 27, 2021 – The U.S. Department of State today announced the allocation of $5.8 million in additional funds for use by the U.S. Embassy in Ecuador for its cooperation with Ecuadorian justice sector and law enforcement authorities to counter transnational crime and narcotics trafficking. The financial support was officially recognized in a ceremony at the seat of Ecuador’s presidency, Carondelet Palace, by Ecuador’s Minister of Foreign Affairs, Mauricio Montalvo, and U.S. Deputy Assistant Secretary of State for International Narcotics and Law Enforcement Affairs, Heide Fulton. President Guillermo Lasso was joined by U.S. Senator Christopher Coons (of Delaware), who was in Ecuador on an official visit, in witnessing the event. These additional funds support the Letter of Agreement on bilateral law enforcement cooperation between the U.S. Department of State and Ecuador’s Ministry of Foreign Affairs, dated September 2002.

In marking the transfer of funds, Fulton said, “It’s an honor to recognize our continued commitment to Ecuador’s security and to our joint efforts to combat narcotrafficking and transnational organized crime. Ecuador is a leader in stemming the flow of drugs to the United States, and we are pleased to support the Ecuadorian government’s outstanding efforts. These funds will allow us to train, equip, and provide technical assistance to the Ecuadorian National Police, Ecuadorian Coast Guard, and the country’s judiciary, prosecutors, and financial intelligence analysts.”

President Lasso affirmed that, “the signing of several agreements in recent years between Ecuador and the United States highlights the will of both countries to act jointly against illicit drug trafficking, as well as against transnational organized crime.” Meanwhile, the Ecuador’s Foreign Minister, Mauricio Montalvo, reiterated “Ecuador’s recognition and appreciation for this contribution by the United States and the will that the country has to continue being a reliable and solid partner in the fight against drug trafficking.”

Marking the end of Senator Coons’ visit to Quito, during which he met with President Lasso and witnessed U.S. government assistance to help combat COVID-19, support for Ecuador’s assistance to refugee and migrant communities, and environmental cooperation through the U.S. Agency for International Development (USAID), the Senator, a member of the Foreign Relations Committee, said: “This investment in counter-narcotics, judicial strengthening, and maritime awareness, in the ability to better see those who would do harm to the people of Ecuador, is a partnership investment we are excited to make.” He continued, “Whether it is strengthening a free media, fair elections, or and independent judiciary, the very structures of our democracies deserve to be supported. We must fight against those who would weaken them and invest in those who strengthen them, and I’m excited for this next chapter in the long and strong friendship between the peoples of the United States and Ecuador.”

Since the reopening of the State Department’s International Narcotics and Law Enforcement Cooperation office in Quito in 2019, the U.S. Mission has delivered capacity-building courses for hundreds of police officials, prosecutors, financial intelligence analysts, judges, and other law enforcement and public security partners. In addition, the U.S. Embassy has provided tactical, technological, and training equipment; vehicles; and canines to strengthen Ecuador’s capacity to stem the flow of drugs to the United States and around the world. While visiting Ecuador, Deputy Assistant Secretary of State Fulton also met with Attorney General Diana Salazar, National Police Commander Tannya Varela, Minister of Defense Fernando Donoso, and Minister of Government Alexandra Vela, as well as representatives from a number of other partner